A pair of socks each month

This was one of my goals for 2013 – and I’m so excited to be completely on-track, at least so far.

In January, I knit my first pair of self-striping socks – for myself. 🙂

Then, for February I knit a pair of socks for my youngest daughter – her older sisters have socks still that I’d made previously for them, but Becca had outgrown her previous pair a while ago, so she was due. I picked a fun self-striping yarn for her too – Loops & Threads Luxury Sock in the Balloons colorway and made just a plain stockinette sock again. She loves them and I did get them done in time – by about 10 minutes. 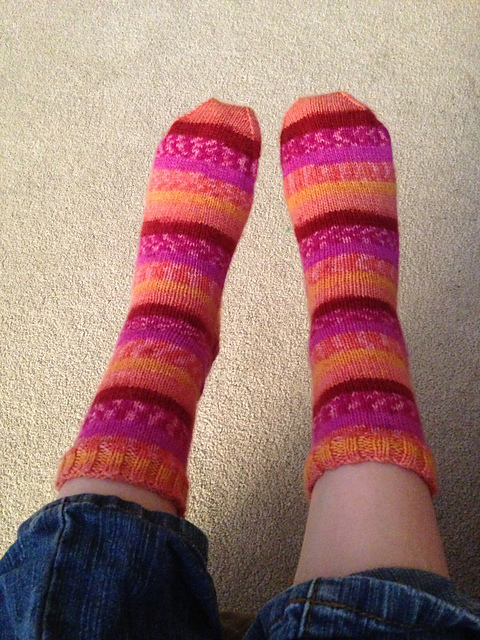 For March’s socks, I was thrilled to have been able to buy a skein of yarn from Fibernymph Dye Works, in her Bounce base. This is the Calypso colorway, and I love the chunky stripes with the eensy while stripes between. Green striped socks make me so happy, so these were again for me. And again, I finished them in time. 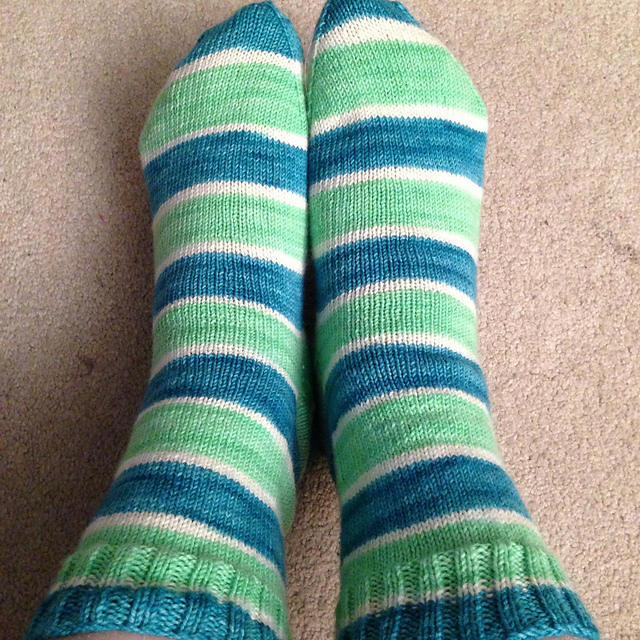 Since my oldest daughter’s birthday falls in April, I decided that it was her turn for another pair of socks. Abbi asked for socks in rainbow colors, which made for an interesting challenge when yarn shopping. I was able to find a rainbow-striping yarn from KnitPicks – their Felici sock yarn in (what else) the Rainbow colorway. 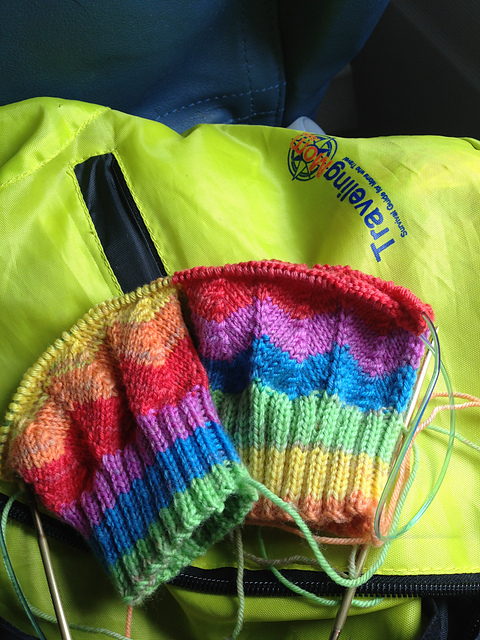 This time I wanted to do something a little different – they’re still going to be self-striping socks and I still wanted a fairly mindless, easy pattern but I wanted something other than straight stockinette. One of my newest podcast favorites is Mel-Tran Designs Knitting Corner and Melissa has a free pattern out on Ravelry for a Chevron sock striping pattern. The pattern is written toe-up, but it’s been very easy to adapt to cuff-down.

Abbi never wears matching socks, so these are going to be fraternal twins – I’m not every trying to match up the striping pattern. It’s kind of freeing to not have to even think about whether the stripes are lining up or not.

I’m making these on size 2 needles (3mm) over 72 stitches per sock. They do fit Abbi’s foot and leg, but she must have a large heel because it’s difficult to get the portion of cuff over her heel. I’m debating whether to keep going or frog these and start over again with 80 stitches per sock. The yarn is really stretchy though, so they may be ok as-is.

Striping sock yarn is so much fun to work with – I’ll have to see if I stay in the stripe frame of mind over the next few months or if I want to try anything else. Socks are a fun way to try out new techniques and patterns with a project that’s fairly quick, easy and portable.