I participated in this program on behalf of Energizer and The Motherhood. As always, all opinions stated are 100% either are my own or those of my family.

As pretty much any family with multiple kids can attest to, toys get handed down, and down – and down from one to the next, which means that the brand-new electric whatzit that you bought when child #1 was a toddler is likely dented, dinged, or scratched with fading paint and peeling decals by the time that toddler #3 (or #4, etc.) gets a hold of it. And with so many toys and gadgets nowadays that all require batteries, it can get very expensive to keep everything running. And then you pull out a toy that your oldest loved but which has sat in their closet for a year (or two) and go to put in fresh batteries, only to find out that the batteries leaked and the toy is ruined.

Sound familiar? I can think of several toys that we’ve lost in this way (remember GoGo My Walkin’ Pup, anyone?), and then the kids are upset because all of a sudden they desperately have to play with such-and-such a toy that they haven’t touched in ages, but which is all of a sudden their very favorite and they can’t live without it. Yes, I have girls – lots of drama in our house, lol.

Back a couple of years ago, my oldest daughter did a science project where she answered the age-old question of which batteries last longer – Energizer or their copper-topped competition? As scientifically as possible, she snapped photo after photo over and over in her camera with a fresh set of each kind – and the answer came out to be that Energizer batteries took more photos. Since that time, I’ve found myself becoming a rather loyal Energizer purchaser – and now they’ve given me another reason to proudly say that we’re an Energizer family, with the introduction of their new Energizer® MAX® with Power Seal technology batteries.

According to Energizer®, their MAX® AA and AAA alkaline batteries hold power for up to 10 years in storage, and Energizer® MAX® protects devices from leakage of fully-used batteries for up to 2 years. I like the idea of protecting our investments (yes, expensive toys or other devices that use batteries are an investment, at least to my way of thinking – especially when we want to be able to pass them down as our kids outgrow them) this way. When I spend money not only on the toy itself, but on batteries to run it, I want to be able to rely on those batteries working for as long as possible, and not potentially ruining said toy if it’s not being used. Not only do we have a GoGo Walkin’ Pup that doesn’t ‘GoGo’ anymore, but I’ve had to replace a baby swing (not an inexpensive item either!) and I can’t even think of how many flashlights because of battery leakage.

Energizer sent me some of their MAX batteries with Power Seal technology to try out, and they’re already hard at work in my youngest daughter’s camera, my ‘good’ camera (rarely used nowadays due to my new Lumix ZS40, so I’m glad to feel confident that the batteries in it won’t leak!), several flashlights (just last week we had a power outage due to a storm rolling through), and yes, a few toys. With my older girls not so much into toys anymore, my youngest has inherited most of them – after her, they’re destined for being passed along either via garage sale or donation to friends’ little ones, so even now having them in good working condition is essential.

Do you know the facts about battery quality and leakage? Here are some myths – and the truths about them (via Energizer). I have to admit that I didn’t know the truth about several of these – how do you think you’ll do? Read on and see…

Myth #1: Batteries only leak after they are left in a device for too long.

Myth #2: Batteries only leak after all the power is used up.

Myth #4: Some battery chemistries are more likely to leak than others.

Our Energizer batteries came brought to us with a friend – our very own plush Energizer Bunny! He’s definitely a recognizable figure and after a very brief (but heated) discussion, he has taken up residence in my oldest daughter’s room. 🙂 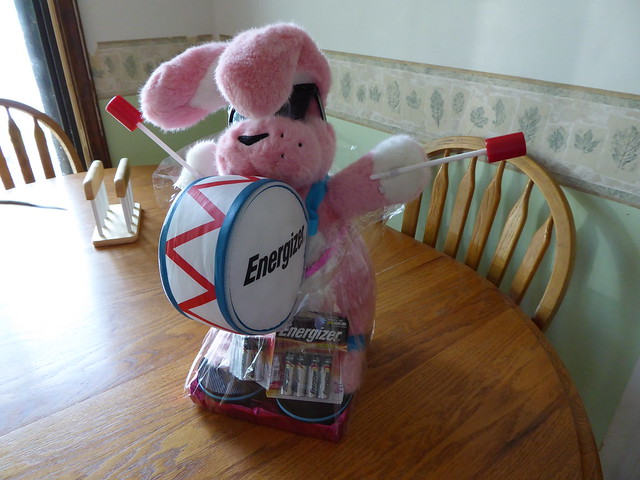 Would you like the Energizer Bunny to bring you a collection of batteries to try out as well? Just enter via the Rafflecopter widget below for your chance to win. This giveaway ends on Saturday, July 12 at noon ET.

Review: Michigan’s Adventure: Two Parks for the Price of One! Being Remembered… #P&Geveryday #sponsored